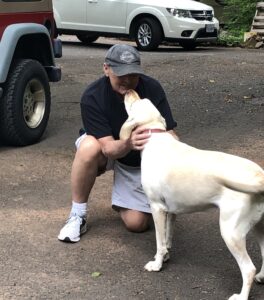 The Northern Virginia Veterans Association (NOVA Veterans) focuses on comprehensively supporting our veterans from their most basic needs of food, housing, and healthcare to encouraging engagement in fitness, the arts and recreation. Understanding that one’s quality of life is more than just getting your basic needs met, but also through thriving and enjoying life. That is our goal and we aim to promote this philosophy through our events, meetings, and community engagements. Our mission became all the more personal when our Director of Services went above and beyond to help a Veteran and his beloved dog, Sasha, while he was battling cancer:

Robert, a Marine Corps Veteran, was referred to NOVA Veterans first in need of transportation to the VA hospital in D.C. for ongoing cancer treatments, and later for a matter quite dear to his heart. Robert had been battling liver cancer for several years and while NOVA Veterans was working with him he received great news on finally becoming a liver transplant candidate. However, this news meant time in the hospital for surgery and a few months recovery period away from home and away from his closest companion Sasha, a beautiful Yellow Labrador and best friend who’s been by his side every day during his ongoing battle with cancer. 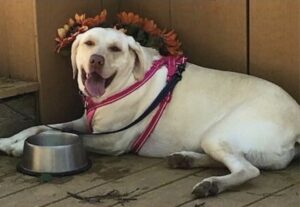 At home, Robert’s beloved Sasha is what’s kept him going. Robert says everybody who meets her loves her and she is a sweet loving loyal companion. Robert had worked as a helicopter mechanic until his declining health required him to stop. Not being able to do the little things like drive a car or walk Sasha has been the most difficult for him during these times of sickness. And thank goodness for caring neighbors Kim and Phillippe who have helped by driving Robert to the grocery store, taking Sasha for walks, and just being there.

Weekly medical visits and painful procedures were the norm for Robert along with the occasional unplanned hospital stay. Waiting on the transplant wasn’t easy as Robert’s health was declining daily. He shared that he could get notified at any time that a liver was available for his transplant and he would have to go to the hospital immediately. Robert expressed he was worried about who would care for Sasha when he was in the hospital and recovering from the transplant for up to three months. That’s when Melissa Dargis, NOVA Veteran’s Director of Services, took immediate action and started researching options.

Melissa knew ensuring Sasha was safe and cared for would allow Robert to have peace of mind so he could focus on his recovery. She discovered a pet foster programs for veterans through an amazing nonprofit called PACT for Animals. This non-profit finds free foster care homes for animals of veterans and deployed members of the military and those hospitalized. PACT screens every case to find the perfect match of foster home and veteran pet. She assisted Robert with the application process and worked with Amy Ricigliano, Executive Director of PACT who responded quickly and efficiently coordinating multiple potential fosters. Together they narrowed down the search to one local Fauquier family, just in the nick of time.

Robert received potential transplant notifications six times before finally having his transplant, and each time required a hospital visit and a series of tests. His neighbors took care of Sasha during these times and finally on the sixth attempt at transplant there was success! This happened at the same time the Fauquier foster family, the McLaughlins, was confirmed by PACT. Melissa joined Robert’s neighbor Kim and met the foster family, Rick and Linda and their son Matt. When Sasha was placed in their home the bond was immediate. Sasha’s tail never stopped wagging and she happily went right over to Matt. The two of them took a long walk together and it was evident they would be the best of friends.

Robert called from the hospital a week after his transplant. He thanked Melissa and NOVA Veterans for finding Sasha the temporary foster home through PACT. He had received pictures from the McLaughlin family and was so happy to see his Sasha enjoying her foster family.

This was truly a community coming together to help our Veteran Robert and his lab Sasha. From a coworker referring Robert to NOVA Veterans, to Melissa supporting Robert’s transportation needs and then his need for a loving foster family. Then having Robert’s neighbor’s Kim and Phillippe who were always nearby to help Robert and care for Sasha during times of need. To finding PACT and bringing them on as a great partner to NOVA Veterans, which was an amazing partnership! PACT responded quickly and worked fervently to secure Sasha a family within two days of learning about Robert’s transplant. And as Linda and Rick (foster mom and dad) regularly send photos of Sasha to Robert, and Matt (foster brother) enjoys walks and romps, we know these relationships will be forever cherished. Robert and Sasha were both overjoyed and overwhelmed with excitement and emotion after being separated for what seemed forever during an extremely trying time.